Which is healthier red or white meat?

Americans are among the largest consumers of meat on earth and many other countries are following our example as meat consumers. Over the years red meat has gotten a bad rap for causing cholesterol and heart problems and so we are told to eat white meat.

Countless scientific studies have concluded that eating red meat is bad for you. But in each of those studies, the researchers routinely fail to differentiate between processed or commercially grown meat vs. free-range grass fed organic beef.  They focus on the commercial, processed meat that has been grown and processed with tons of antibiotics, steroids, food additives, flavorings, meat glue, etc. omitting the free-range beef and lamb grown and finished on grass that is free of all the commercial processing and short-cuts. In doing so, they cast a dark shadow of doubt over all red meat, when the reality is that red meat is one of the healthiest meats with the highest nutrition in comparison to white meat.

Which is healthier red or white meat?

Let me explain, and then make your own judgment.  Man has been eating red meat since the beginning of time. It has provided him with the highest level of nutrition. Red meats such as venison, deer, lamb, bison, and the cow, are all wonderful, healthy meats, when raised the right way.  For instance, eating wild venison helps raise one’s immunity against poison ivy, poison oak, and other related weeds.  American Indians, who ate a majority of red meat, used to have bows that were estimated at 300-pound plus pull that most white men could not even use. The Indians had a tradition of eating the freshly killed bison or venison liver raw, which accounted for the warriors’ incredible strength.

How is commercial beef raised?

68% of them are grown in Florida and fed on low nutrition grasses for 15 months. (There is no stewardship or enhancement of their pastures.) These 700 pound calves are then shipped by train to the Midwest to feed lots, where they spend the next three months of their lives consuming genetically engineered corn and soy and given loads of antibiotics, steroids, and growth hormones in a very dirty confined space. They will go from 700 pounds to 1400-1500 pounds, doubling their weight. Wow! This is why you feel tired after eating a big steak from a commercially grown animal, rather than energized from a free-range, naturally raised animal.  You’re body is resisting the steroids, antibiotics, and growth hormones from an unhealthy animal.  Though naturally grown grass-fed and finished beef costs a little more, it is a good investment in your health. 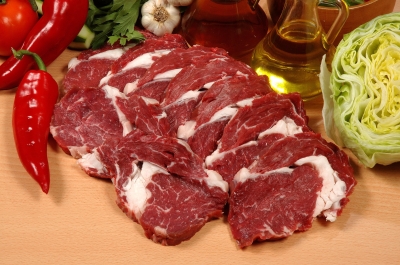 What about the other white meat?

Pork has DNA that is related to our DNA.  So, when consuming healthy pastured (free-range) pork that is grown in it’s ideal environment has tremendous abilities to repair the human body.  When my wife’s disks were herniated and her knees injured, the Chinese doctor recommended for her to eat lots of pork cartilage, such as pig’s feet to repair the damage, which it did.  However, vegetarian fed pork is unhealthy, as pigs are meant to eat some bugs and small animals as part of their diet.  They too, as omnivores, similar to us, need to eat some red meat in order to be at the peak of health.  When they don’t eat a varied diet, they become crazy for meat.  Commercial pig farmers caution people not to fall in the pigpen, or they will be attacked by meat-crazed pigs.  When pigs are fed the way Mother Nature intended, they are calm, happy, affectionate, docile animals.  Pork that is grown with a varied diet in other countries actually has red meat, not pale meat. When you eat bacon or sausages that are not treated with nitrates or nitrites to preserve the meat, but smoked in the old fashioned way, it is a healthy treat.

So the question is not which is healthier red or white meat? But how was the meat raised and processed?

While chicken is good for you to consume, the commercially grown with GMO grain, antibiotic, steroid, and hormone-laden commercial chicken is far worse than beef could ever dream to be. When you consider that they can grow a commercial chicken in six weeks or less and the regular organic farmer takes 8-12 weeks to grow the same size chicken, recognize how pushed this process is.  This is why it is important to eat free-range chicken raised with no hormones, steroids, or antibiotics. You will notice the healthy energy you feel after eating it.

You do not want to have the effects of antibiotic resistance, or estrogen dominance in your body as a steady diet.  You’ll reap many problems, including menstrual for girls/women, cancer, and sexual development/performance problems for men.  You’ll pay a little more, but as more of us demand healthier meat, the large producers will supply it.

So, yes when you go shopping, you should understand that when you buy regular commercially grown beef, pork, chicken or farm raised fish, that you are also consuming commercially grown GMO grains, antibiotics, steroids, hormones and many other weird things.  It may be more convenient to run down to the local supermarket and buy your meat and eggs, than searching out farmers who will supply you with meat and eggs raised in a pastured ideal natural way, forcing you to invest in a freezer.  But, remember, you can either pay the farmer or the doctor – your choice.  You can save a few bucks at the grocery store, but then have to spend money at the doctor’s office.  It’s your choice red or white meat but, GMO or Non-GMO?

Want to know more? Check out these articles


How Can Probiotics Help Fight The Common Cold?